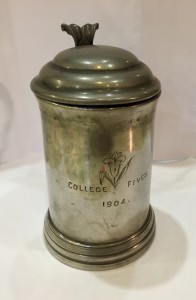 Much of the focus upon the life of Henry ‘Harry’ Moseley relates to his scientific achievements but in parallel to these, he was a keen sportsman throughout his early education and University studentship.  Harry’s sporting interests began with the game of ‘Fives’ a sport he first took up as a student at Summer Fields in north Oxford which he attended between 1897 and 1901. This was not the traditional English handball sport of ‘Fives’ but rather ‘racquet-fives’, the game now known as squash. There are many mentions of the game of ‘racquet-fives’ in school magazines as well as letters in the Summer Fields archives but it was not until 1922, over twenty years after Harry had left Summer Fields, that the first ‘hand-fives’ (more commonly known as ‘Fives’) courts were constructed in the school playground. The new ‘Fives’ courts were constructed, in part, to honour the memory of the Old Summer Field students (including Harry) who were killed in the First World War.

‘Eton Fives’ was one of the many sports Harry was encouraged to pursue during his time at Eton and Harry willingly participated in all the sports available to him with the exception of cricket. ‘Eton Fives’ was and is the most common variant of Fives, a traditional English handball sport, so called as it was first developed at Eton College from essentially hitting a ball against the side of the chapel. The basic pattern of play is quite like rackets or squash, but there is no singles version of the game, and you hit the ball with your hands (protected by gloves) rather than a racket. In 1901, Harry left Summer Fields for Eton College on a King’s scholarship and continued to play ‘Eton Fives’ for his five years at the school between 1901 and 1906. The first proper ‘Eton Five’ courts were built at Eton in 1847, so Harry would have been able to play officially rather than when the boys thought they wouldn’t get caught! In 1904, Harry won an internal house competition for ‘Eton Fives’ – for King’s scholars such as Harry only – and was awarded the small tankard shown as a prize.

Sports of all kind, in particular rowing, were esteemed at Eton during this period and Harry actively participated in Eton Fives alongside Eton football, and rowing. He determinedly pursued success in rowing and was eventually awarded a place in the second College Fours although he preferred to use rowing as a means of solitary pursuit of birds eggs – Harry saw his sporting activities as being complementary to his academic and scientific activities In 1904, the same year Harry was awarded the ‘Eton Fives’ tankard trophy shown, he was also awarded a copy of Charles Darwin’s The Descent of Man (1899) as an academic prize in spring 1904. The book is now held in the Trinity College War Memorial Library to which it was donated by Harry’s mother Amabel after the war.

When Harry left Eton College in 1906, he went up to Oxford where he studied Natural Sciences (eventually choosing physics) at Trinity College and was awarded a Millard scholarship.  He also continued his parallel academic and sporting activities: rowing in the college 1st eight (once) and college 2nd eight (thrice) during his four years at Oxford.