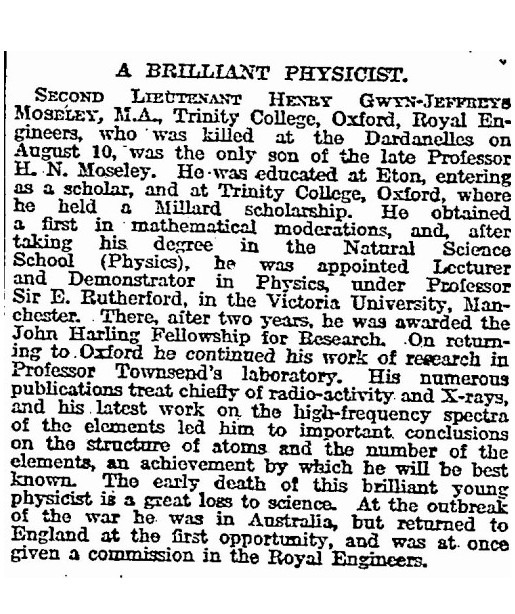 News of Harry’s death spread quickly. Newspapers in Britain reported it under headings such as “Sacrifice of a Genius”. Even German newspapers commented on his loss, though he was now formally an enemy.

Across the political and military divide, the international scientific community was shocked by Harry’s death. His former supervisor Sir Ernest Rutherford especially condemned the waste. His untimely death meant he was not eligible for the 1916 Nobel Prize for Physics which many thought his achievements deserved.

Rutherford, who had tried unsuccessfully to get Harry out of frontline service, argued strongly that scientists should put their talents to use in research aimed at meeting military goals in wartime rather than being sent to fight and die on the battlefield. By the end of the war, Rutherford’s goal had been achieved in part due to the immense impact of Moseley’s death.

Moseley’s scientific research and methods continue to be of influence today. Harry’s establishment of a deeper scientific understanding of the Periodic Table of Elements remains important today, as does his role in the foundation of X-ray spectroscopy. More generally, his research signposted the direction physics would take in the early to mid-twentieth century.

News of Harry’s death reached his mother in late August and very soon was made public. Within a week, Amabel began to receive and respond to personal and scientific recollections relating to her son. She worked closely with Harry’s supervisor Sir Ernest Rutherford to gather together Harry’s scientific legacy. The shock waves were felt internationally: the French chemist Urbain, who had visited Moseley in Oxford, expressed his profound dismay.

In September 1915, Rutherford wrote a moving obituary of Harry in the scientific magazine Nature, deploring the death of such a scientific talent and campaigning for scientists’ specialist skills to be more effectively harnessed in wartime. Three years later in 1918, and with the war still underway, Amabel marked the anniversary of Harry’s death in her personal diary.

This is the last will and testament of me Henry Gwyn Jeffreys Moseley Second Lieutenant Royal Engineers now on active service with the British Mediterranean Expeditionary Force. I give and bequeath all my estate real and personal and my reversionary interests therein to the Royal Society of London to be applied to the furtherance of experimental research in pathology, physics, physiology, chemistry or other branches of science, but not in pure mathematics, astronomy or any branch of science which aims merely at describing, cataloguing, or systematising. Made on the twenty seventh of June, 1915 by me Henry G. J. Moseley

Harry’s will, written in Alexandria, Egypt

Harry’s experiments and calculations predicted the position and properties of ‘missing’ or undiscovered elements in the periodic table. He also disproved the existence of several hypothetical elements. 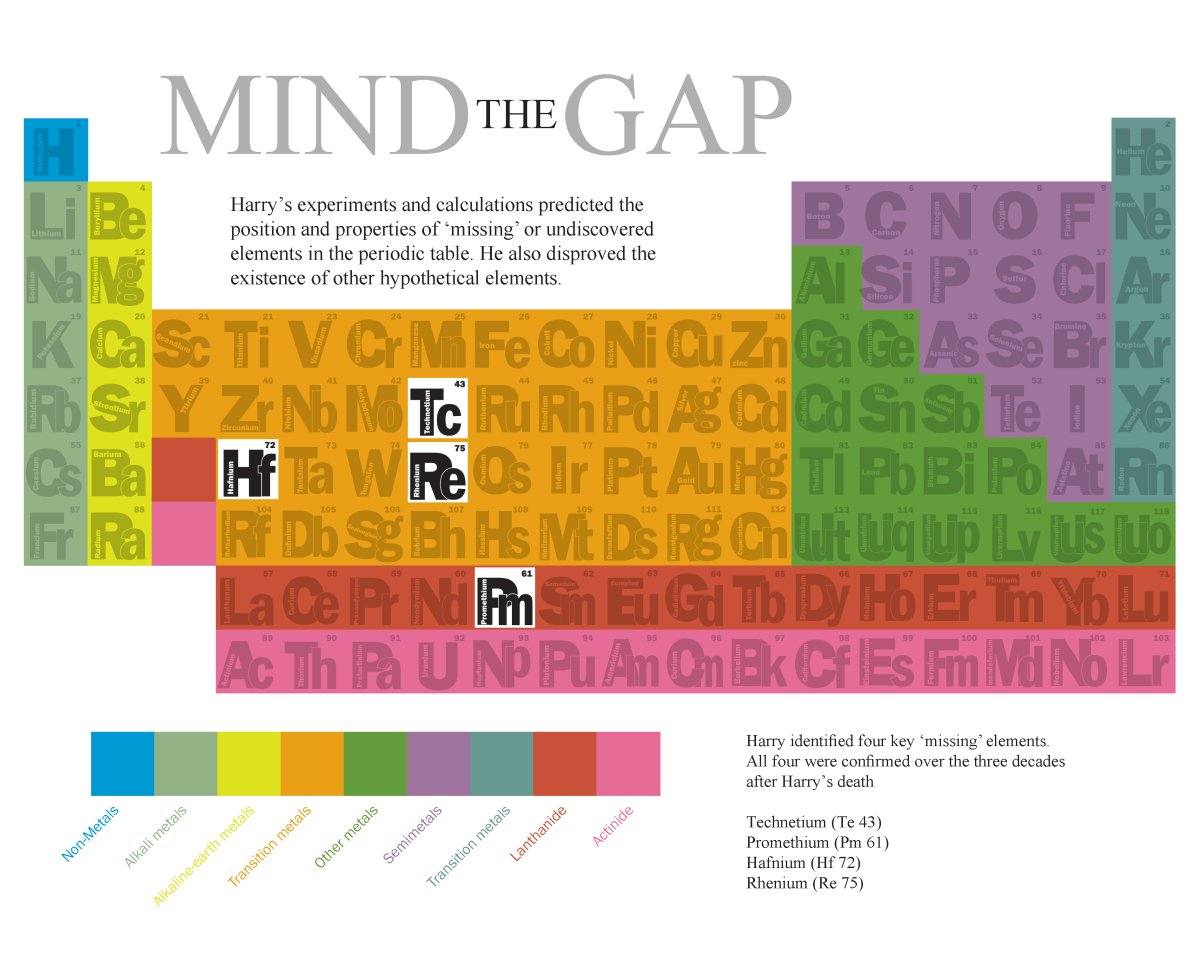 Those heroes who shed their blood and
lost their lives … you are now lying
in the soil of a friendly country.
Therefore, rest in peace.

There is no difference between the Johnnies
and Mehmets to us, where they lie side by side
here in this country of ours …
You, the mothers, who sent their sons from
far-away countries, wipe away your tears.

Your sons are now lying in our bosom and
are in peace. After having lost their lives on
this land they have become our sons as well.

The Dear Harry… exhibition is the first major outcome of our project on Henry ‘Harry’ Moseley, supported by the Heritage Lottery Fund.

Accompanying the exhibition is a rolling programme of public events and online content with details available soon.

A long-term legacy of the project will be a new permanent display of Harry’s apparatus in our basement gallery. It will open at the end of the year and draw on the research and content of this exhibition.

Dramatically improving on our previous display, it will allow future visitors to better engage with Harry’s life and work. In parallel, our online repository of newly digitised Moseley material will enable researchers and the general public to better appreciate one man’s contribution to our understanding of the physical structure of the world around us.