From gigantic televisions to tiny iPods, the moving image today is all around us. Mobile phones capture it, play it and share it digitally, while advertising hoardings have leapt firmly into the realm of science fiction, animating their once-static messages before our eyes. We may take modern video for granted, but the first steps towards true motion pictures began with simple yet marvellous toys of optical illusion. In the days before the earliest forms of cinema were created by the Lumière brothers in 1895, Victorian optical toys provided a charming and instructive array of moving picture demonstrations. 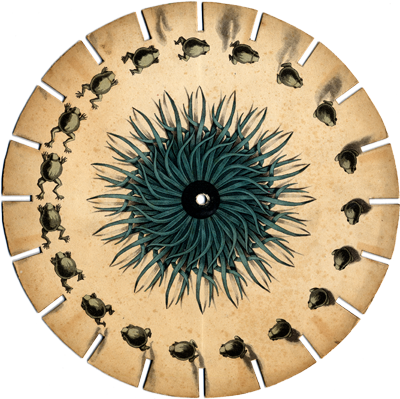 They were often simple in design and use but their names suggested fearsome technical complexity: Phenakistiscopes,
Praxinoscopes and Choreutoscopes. Yet these elaborately named devices were mass produced for a huge general audience. At the same time, scientists were delving deeper into optical phenomena, including the persistence of images on the retina, from which an illusion of movement can be obtained.Such investigations led to a rich and visually stunning assortment of optical instruments. From the fancily named Thaumatrope to the simple Flip Book, the toys outlined in this exhibition heralded the emergence of cinema, but retained an enduring appeal long after movies hit the silver screen.