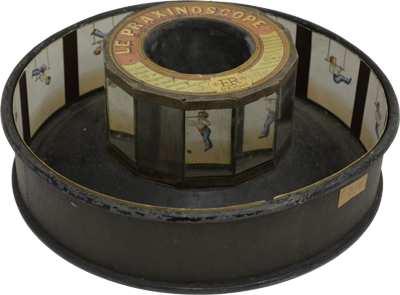 PraxinoscopeThe Praxinoscope is a typical optical toy from the 19th century. It consists of a cylinder and a strip of paper showing twelve frames for animation. As the cylinder rotates, stationary mirrors in the centre reveal a ‘single image’ in motion.
The Praxinoscope was invented in 1876 by Charles-Émile Reynaud (1844-1918), a Paris science teacher, who marked all his examples ‘E.R.’. The toy became a great commercial success and won recognition at the great exhibitions of the period.

What’s in a name?
Like so many of its competitors, the Praxinoscope had a fancy classical name. It was formed from the ancient Greek πρᾶξις [praxis], meaning ‘action’, plus σκοπεῖν [scopein], meaning ‘to look at’.