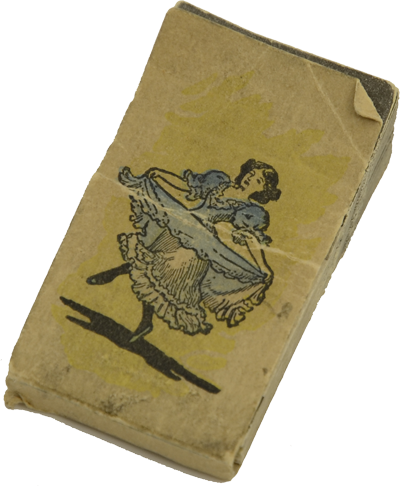 Flip Book
With their simple but charming form of animation, Flip Books became one of the biggest selling optical toys in the late 19th and early 20th centuries. The books are designed so that each page’s image advances the scene from the previous page; when the pages are thumbed rapidly the sequence becomes animated due to the persistence of vision.

Although Frenchman Pierre-Hubert Desvignes had the idea for what he called folioscopes around 1860, it was the English printer John Barnes Linnett who patented a design in 1868 for the Kineograph (‘moving picture’) booklet. With each page representing a ‘frame’ in the animation, Flip Books prefigured the development of the motion picture. 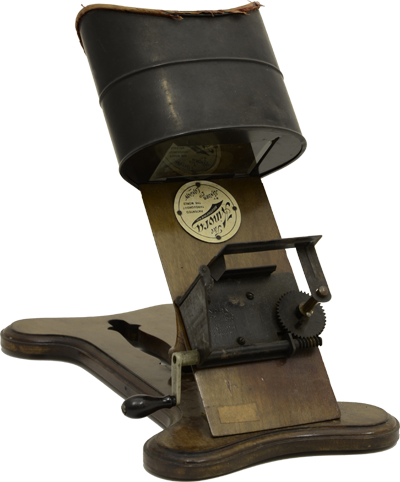 Kinora
The Kinora was an early motion picture device
invented in 1896 by the Lumière brothers, Auguste (1862-1954) and Louis (1864-1948), the first filmmakers in history. It consists of a viewer with a concave lens mounted on a wooden stand. A handle on the stand rotates a wheel, attached to which is a type of Flip Book (see display below). In 1898, rights to the Kinora were purchased by
Kinora Ltd. In 1902, the device launched in Britain and was the most popular moving image viewer until the First World War. After the company’s London factory burnt in 1914, public interest in the Kinora waned and cinema finally took its place. A very similar instrument, the Mutoscope, was patented in 1894 by the American engineer Herman Casler (1867-1939).

Filoscope
The Filoscope is a type of Flip Book patented in 1897 by English filmmaker Henry William (‘Harry’) Short and sold through his Anglo-French company Filoscope Syndicate. The book is fixed in a tin plate holder, with an iron lever used to flip through the pages. The subjects of the Filoscope were usually films by Robert Paul (1869-1943), a pioneer of the British film industry and Short’s friend.