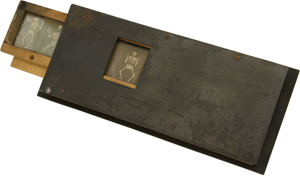 Choreutoscope
The Choreutoscope is the first pre-cinema device to employ the same principle as the Cinematograph, an early film camera and projector. A slide is drawn by hand-crank across a viewing pane, while a synchronized guillotine shutter closes the pane between images on the slide. The most common subject for Choreutoscope animation was the ‘dancing skeleton’, in which six sequential images of a skeleton are animated in the viewing pane.

The device was invented in 1866 by English physician Lionel Smith Beale (1828-1906), who used it in demonstrations at the Royal Polytechnic. However, Beale never patented his design so the first patent for a similar device was claimed by A. B. Brown in 1869 in the United States. William Charles Hughes (1828-1906), an English optician, patented another version of the Choreutoscope in 1884.