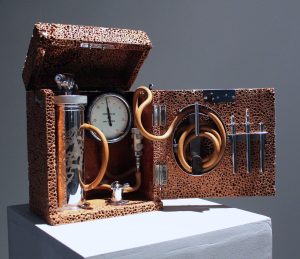 This altered Pneumothorax Machine was originally used to collapse the lung of a tuberculosis (TB) patient. The object is transformed through intricate carving and engraving. The carved case represents the texture of the lung tissue as the immune system attempts to ‘wall off’ the ‘foreign’ TB bacteria that it cannot eliminate. The engraving represents the TB bacteria under the microscope.

The therapy was intended to give the lung “a proper rest” in the belief that this would give it a chance to repair itself, and also that it would cut off the oxygen supply to the TB bacteria and kill them. Around one third of pulmonary (lung) TB patients underwent some form of so-called ‘collapse therapy’ between the 1930s and 1950s until antibiotic treatments replaced this unpleasant procedure. The rise of drug resistant tuberculosis has seen new trials of artificial pneumothorax treatments.