The idea that different mental functions might be associated with specialised areas of the brain was for a long time mostly speculation. Thomas Willis believed that ‘superior’ functions, such as memory, thought and imagination, originated in the large corrugated cerebrum, while the lower cerebellum dealt with involuntary actions such as digestion and breathing.

Studies in the 19th century revealed that brain injuries affected patients in different ways depending on the area of damage. But it took advances in neuroimaging in the 20th century to allow true regional functions to be directly observed for the first time.

Gall snuffbox (MHS inv. 13366)
German physician Franz Joseph Gall (1758-1828) was the founder of phrenology (or organology), which aimed to reveal the character of a person from the form of the skull. The more prominent a bump, the more highly developed the functional area of the brain below, as shown on this phrenological snuffbox, marked out according to Gall’s system. Phrenology was largely discredited by the end of the 19th century and ceased to be practised. 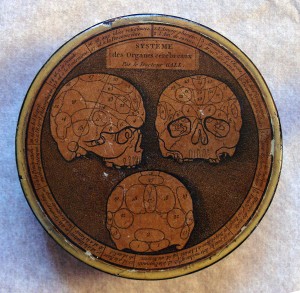 Visual cortex
Below is a model of a visual cortex, a region at the back of the brain, in the occipital lobe, that is responsible for processing visual information. The outlines of the three-dimensional form are built up here on a series of plastic sheets. Each sheet represents a microscopic section of the visual cortex. Model of the visual cortex of a cat. Property of the University of Oxford’s Department of Physiology, Anatomy and Genetics:

fMRI scan superimposed on a drawing of a head

A technique called functional magnetic resonance imaging, or fMRI, directly measures activity in different regions of the brain. fMRI detects the changes in blood oxygen level and blood flow that occur during neural activity. When a brain area is more active it consumes more oxygen and blood flow increases. fMRI can therefore be used to build up maps showing which regions of the brain are involved in different mental processes.

The video shows a real fMRI scan superimposed on a drawing of a head, synchronised with the animation which provided the visual stimulus for the fMRI response.