The second century Greek anatomist Galen argued that the brain was powered by ‘animal spirits’ which blew through the brain’s ventricles. But by the mid-18th century a growing fascination with electricity – and its production in animals – led to a host of electrical medical treatments, including the application of electricity directly to the head. Further experiments in the 19th century confirmed that the brain is in fact powered by electricity, and that different areas of the brain control different faculties and processes.

Magneto-Electric Therapy Machine (MHS inv. 28870)
This is a simple portable electroshock therapy machine for use in treating ‘nervous diseases’. A crank handle at the front turns gears which are connected to electromagnets. The treatment, now called electroconvulsive therapy (ECT), induces a seizure in order to create a therapeutic effect on various mental illnesses. 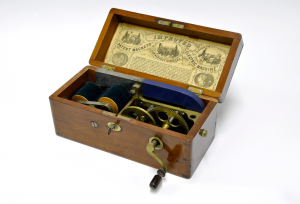 Falling Plate Camera, c. 1920 (MHS inv. 81892)
This camera, owned by Sir Charles Sherrington, was used to record the responses of muscles to an electrical stimulation. A muscle tendon was attached to a torsion rod, in turn connected to a beam of light. When the electrical stimulation was applied, the camera’s plate also fell into position and recorded the movement of the light, which showed how much the muscle had contracted. 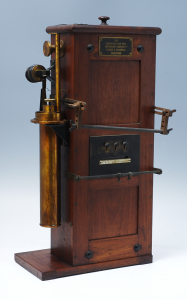 Deep brain stimulation
Deep brain stimulation, or DBS, uses an implanted brain pacemaker to send electrical impulses to specific parts of the brain. It has been used therapeutically in people with Parkinson’s disease and other neurological movement disorders. This video shows how the condition of a patient with Parkinson’s is dramatically improved through DBS treatment.