During the 19th century, new ways were found to investigate the structure of the brain. Examining thin slices under the microscope, the previously inscrutable grey matter started to reveal a detailed architecture of connected nerve cells, or neurons.

Italian physician Camillo Golgi (1843-1926) created a revolutionary staining technique that illuminated the paths of nerve cells in the brain. Spanish neuroscientist Ramón y Cajal used this to create incredibly detailed images of neuron structures. Influenced by Cajal, Sir Charles Sherrington, Waynflete Professor of Physiology at the University of Oxford, received the Nobel Prize in 1932 for his own work on the functions of neurons.

Photomicrographs of Cajal’s slides, prepared by Charles Sherrington
Images of slides brought by Cajal from Madrid to London for a lecture to the Royal Society. The left image shows cerebral cortical blood vessels; the right image shows the dendritic structure of a type of brain cell found in the cerebellum called Purkinje neurons. 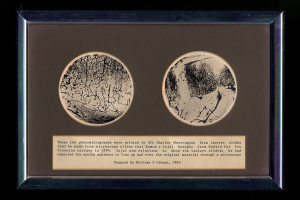 Photomicrographs of Cajal’s slides, prepared by Charles Sherrington. Property of the University of Oxford’s Department of Physiology, Anatomy and Genetics.

Structures and Sections
To study the microscopic structure of the brain, thin sections were prepared and mounted on slides. Precise control of the thickness of the cut sections was achieved using an instrument called a microtome, shown below.

Microtome. Property of the University of Oxford’s Department of Physiology, Anatomy and Genetics.

Fruit fly brain cells
This video shows two sets of cells inside the brain of a fruit fly, one coloured green and the other blue. These cells are involved in processing ‘reward’ responses, such as the fly’s response to receiving a sugar. It is now possible to use genetically-encoded triggers to activate individual neurons such as these using light (optogenetics) or temperature-sensitive tools (thermogenetics) to stimulate certain responses in the animal.

Embryonic mouse brain
This footage is produced by a technique called Optical Projection Tomography and shows a 3D scan of the blood vessel system of an embryonic mouse brain. The Circle of Willis, a circle of arteries that supplies blood to the brain, has already formed from the branches of other arteries in the head and neck.