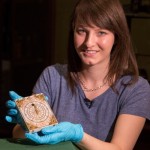 What is a diptych dial?

A diptych dial is a type of sundial that gains its name from the two hinged leaves which open like a book. As with other sundials, the diptych dial uses shadows cast by the sun to tell the time.

How does it work? 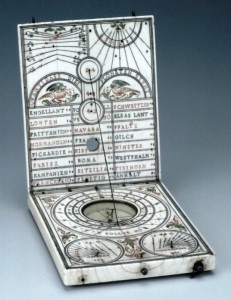 When opened, a cord holding the top leaf of the dial in its upright position allows it to act simultaneously as the gnomon (the shadow-casting part of the dial). To use the dial to tell the time, it should be placed outside on a horizontal surface, and orientated so that the gnomon is pointing towards true north. This is done with the help of a compass which is embedded in the horizontal leaf within the main dial.

What else could it do?

These dials were often complex and had many additional features and accessories. Many of these were far from essential and merely catered for a growing market looking to display their wealth and sophistication.

Like many of its type, this dial could be adapted for different latitudes, a useful feature for a travelling merchant. On the inside of the upper leaf is a table which shows the different latitudes of a number of European cities. This is necessary because the apparent height of the sun in the sky at any one time varies as you move to different latitudes.

On the inside of the lower leaf there are two other smaller dials with pin gnomons; these can be used to calculate alternative time systems. One of the dials indicates ‘Italian’ hours and the other, ‘Nuremberg’ hours. The dial also has a wind rose on the outside of the upper leaf. You could use to to show the direction of the wind by inserting a small wind vane when the dial was closed. A lunar volvelle on the underside allowed the user to calculate the time at night, by converting the shadow of the gnomon cast by moonlight to corresponding solar time. 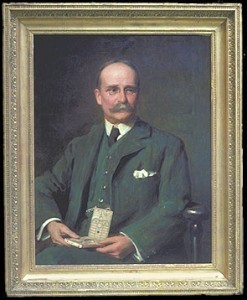 Portrait of Lewis Evans holding this Diptych Dial in the Museum

These types of dial were made in Nuremberg in the 16th century by a small number of families who specialised in manufacturing these instruments. This one was probably made by the Tucher family. Made from ivory, these were intricately decorated and expensive personal timepieces generally afforded only by wealthy merchants or nobility.

This diptych dial was owned by Lewis Evans, an avid collector of scientific instruments in the late 19th-century who bequeathed one of the founding collections of the Museum. In the painting of Lewis Evans that hangs in the entrance gallery of the Museum you can see him holding the dial.

Dowload the PDF of this text here.