When Stanley Jevons had his idea that the processes of logical inference might be mechanised in the 1860s, the last decade of Charles Babbage’s life, he was probably unaware that Babbage, who had had the idea that the processes of mathematical calculation might be mechanised in 1821, had afterwards extended that possibility to embrace algebra and programmable instructions and thus “accomplish the whole of analysis”. By inference this means it would handle logic too, since any system for mechanising logic would have to be algebraic. 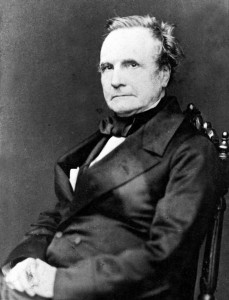 Charles Babbage - the father of the modern computer?

Babbage’s “analytical engine” was fully conceived and designed in the 1830s and 40s– but never made. The question about whether Babbage should or should not be regarded as having invented the computer hinges on the frustrating fact that this is too early for either the logical process envisaged by Jevons or the algebraic method devised by George Boole to have formed part of it, so they are not mentioned by Babbage; but Babbage did know about Boole’s work (published in 1854), and Babbage and his collaborator H. W. Buxton (through whom we have our Babbage collections) repeatedly stressed in the 1860s and 70s the “universality” of Babbage’s analytical machine

Jevons actually corresponded with Boole, leaving less room for doubt that he would have employed Boole’s algebraic logic had he persevered; he did make his machine, and showed it to the Royal Society in 1870 (and we all know where it is now), but he thought that it was “quite as likely to be laughed at as admired” [genuine Jevons quote] — and it was — so he returned to his main interest, economic theory ; Boole likewise found that his 1854 book on the laws of logic was treated at best as marginal if not as a laughable eccentricity by his mathematical colleagues ; for many years after their deaths Boole and Jevons were respected for their mainstream but not very important achievements, Boole in mathematics and Jevons in economics and philosophy, while Babbage (a much more distinguished figure) was considered one of the great deluded eccentrics of the time, famous above all for having failed to make any of the inventions he went on about

As late as 1932 a dicussion among top statisticians and technologists at the Science Museum, London, acknowledged that Babbage’s difference engine (the 1821 calculator idea, the thing we’ve got a chunk of) was a good idea, had he been capable of finishing it, but confirmed that it was still the prevailing opinion that his “analytical engine” idea was crazy

At nearly the same moment, probably unaware of any of this, an eccentric young mathematician named Alan Turing also became interested in logic and also had the idea that it could be mechanised; he devised a thought-experiment in which he envisaged a machine with universal analytical capabilities…

Jevons’s logical “piano” is now regarded as one of the precursors of the computer; “Boolian logic” is now a famous and fundamental mathematical technique, and is the basis for the operation of all computers; and the “universal Turing machine” is now the root of all computational and computer theory

And Babbage… well, he’s just an old eccentric, isn’t he?

(MHS doesn’t have anything of Boole or Turing, though the exceedingly eccentric “chemical calculus” devised by the Oxford professor Brodie, whose papers we have, was inspired by Boole’s logic and dismissed by his contemporaries)