Moseley’s death in 1915 was a great loss both personally and to science. As a gifted young physicist, he was a likely candidate for one of the Nobel Prizes of 1916. However, it was not be. 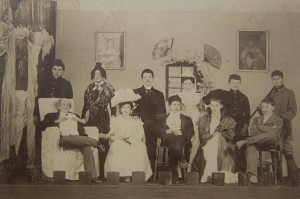 Summer Fields school photograph of ‘A Regular Fix’ cast in costume including Moseley in centre back (1900).

At the beginning of the Michaelmas Term 1897, Henry Moseley, better known to his friends and family as Harry, began his Summer Fields career as one of twenty-eight new boys. One can readily imagine the heady mixture of excitement tinged with apprehension as they set foot in a strange, new world and climbed on to the springboard for what should have been a straightforward trajectory: prep school, public school, university or some sort of specific professional training, leading to a prosperous and comfortable life thereafter. But, for these twenty-eight, Fate intervened. In 1914, Europe was plunged into a four-year war of bloody attrition which claimed the lives of millions – combatants and non-combatants alike. In Britain, tens of thousands of volunteers quickly offered themselves for military service, motivated variously by patriotism, a sense of adventure, or by the notion that Britain had just cause to go to war, because, as Thomas Hardy put it, ‘the Germans wanted to fight’. What did 1914-18 have in store for Harry Mosley and ‘the class of 1897’? How did they fare?

One new boy, Stewart Ferguson, left after only one year and little else is known about him. He is therefore excluded from most of the statistics that follow. Not all of his new companions were intimate friends, but Harry would have been acquainted with all of them, sharing many experiences both in the classroom and on the sports field. 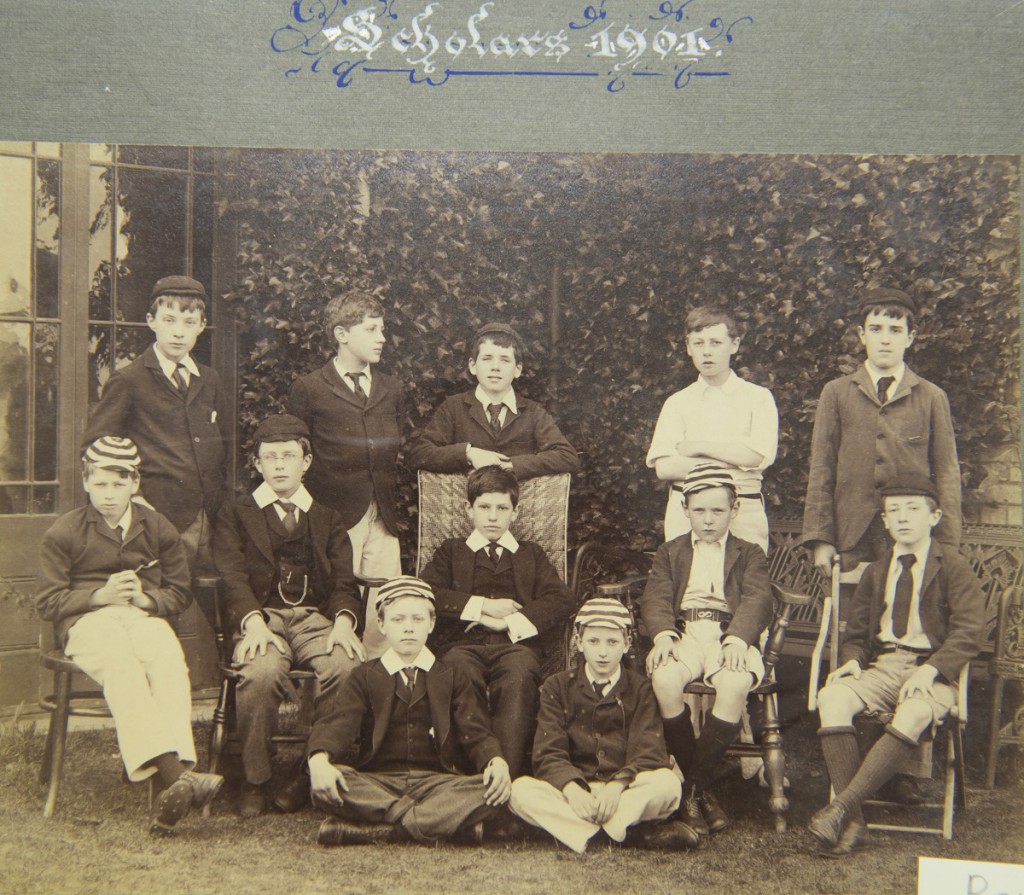 On the outbreak of hostilities, twenty-three of the remaining twenty-seven (85%) took their place in the First World War. This piece focuses on these boys and, principally, on those who did not survive. In 1914, their average age was 26. By that date, all had completed their secondary education, the majority having been to Eton, with Charterhouse and the naval training ship, HMS Britannia, the next most popular destinations. Table 1 below provides a detailed breakdown of their schools, including Britannia.

Table1: Summer Fields new boys 1897: Schools of those who served in World War I

In terms of the university education of those who went to war, Cambridge was the preferred place for seven boys; only three went to Oxford: Harry Moseley to Trinity in 1906; William Waller, a medical man who studied at New College and University College Hospital and Caryl Hargreaves, at Christ Church. James Wilson read medicine in London and Charles Saltren-Willett studied Engineering in the brand-new department at Birmingham.

Of the twenty-three in the war, eleven were killed. This represents 48% of those who served and 39% of the original 1897 group. These are high percentages, especially so when compared with the 12.5% death-rate for serving personnel calculated for Britain as a whole. This national figure includes all ranks. Virtually all of those of Moseley’s year who were killed (91%) were junior officers leading their men into battle or succumbing to snipers. Two of the eleven died later of wounds received in action. Interestingly, all those who lost their lives had served in the Army; their average age at death was just 28.

How does this group compare, in terms of the proportion of those killed to those who served, with that for the whole school? According to the Summer Fields Register, approximately 641 Summerfieldians took part in the war; there are 139 names on the Memorial Brasses outside the Chapel. This gives a death-to-service proportion of 21%. However, if we take Chris Sparrow’s slightly higher total of 142 deaths [Chris Sparrow, No Time to Spare? Our Boys who went to War… (Gresham Book Ltd, Oxford, 2006), p. 206], this increases to 22%. The true figure must lie somewhere in this region and, again, is significantly higher than the national average for Great Britain.

What was the pattern of death across the war years for the unfortunate eleven? As shown in Table 2, the year 1915 was the worst, when Harry Moseley and four of his former contemporaries were killed.

The specific military context of each death may be studied in Chris Sparrow’s book, mentioned above. Nonetheless, it is interesting to draw together some other points concerning Moseley’s early friends and acquaintances. Theodore Bailward and Maurice Rutherfurd died in 1915, having been exact contemporaries at Summer Fields and Rugby. In the same year perished Robert Squires (Charterhouse), a keen mountaineer and member of the Alpine Club. Squires was famed for being part of a British team which in 1912 made the first ascent of Mt. Kolahoi, a Himalayan peak of 18,000ft. in Kashmir. He was killed on 9 August, the day before Harry Moseley. Moseley and his fellow Etonian, Roger Gelderd-Somervell, died just five months apart. Moseley was killed in action on 10 August during the assault on the high ground at Chunuk Bair during the Dardanelles campaign, reported as being shot by a Turkish sniper; Gelderd-Somervell was killed on 11 March while on attachment to the Indian Army as an interpreter.

During 1916, three more of Moseley’s Summerfieldian acquaintances lost their lives. On 21 January, Hugh North (Wellington) died in action against the Turks in Mesopotamia and Edward Bovill (Harrow) fell a few months later, on Saturday 1 July, the first morning of the battle of the Somme. John Ansthruther, another Eton contemporary of Moseley, was killed in action with the Life Guards on 30 October at Zandvoorde, south-east of Ypres, during a massive German attack on their trenches.

James Wilson (Radley), a doctor with the RAMC, died on 23 August 1917 at Poperinghe from wounds received in action at Somme Farm. He had won an MC during the previous year for his ‘conspicuous gallantry and devotion to duty’. On several occasions Wilson had gone up to the front line from his Aid Post to treat and supervise the evacuation of wounded men under heavy fire. His citation recorded that ‘by his pluck and skill he undoubtedly saved many lives’.

The final year of the war, 1918, saw the remaining two deaths of those boys who had started Summer Fields with so much promise in 1897. John Muir (Fettes) was killed in action near Ypres on 11 April. As a major at the time of his death, he held the most senior rank of the eleven to die. Six months later, on 14 October, Maurice Arbuthnot died from his wounds after being invalided home. Arbuthnot was another Etonian contemporary of Moseley. He had had a notable war, winning an MC in 1917 and, just a few months before his death, being honoured by the French with a Croix de Guerre. Arbuthnot was also twice mentioned in despatches and before the war had served as ADC to the cavalry commander, General Sir Hubert Gough.

So, what did the post-war years hold in store for those who had started at Summer Fields with Moseley and who had served and survived? Of the five naval men, little is known of Edward Hastings other than that he attained the rank of commander and was awarded an OBE. Francis Bridgeman, who had served in the Dardanelles and at Jutland (1916), became a bank manager with Kleinwort & Co. Frederic Buchanan remained in the Navy, rose to the rank of captain and eventually became the Chief Inspector of HM Coastguards. Richard Guinness (Eton) went into business and Charles Saltren-Willett (Charterhouse) became a successful electrical engineer, dying in 1949.

Of others at Eton with Moseley, John Churchill enjoyed a successful military career winning a DSO and an MC, as well as being three times mentioned in dispatches. He also served as ADC to King George VI from 1947 to 1952. George Henderson, who had entered College as a scholar with Moseley, was also the recipient of an MC. He continued his Royal Flying Corps career in the RAF and was killed in a flying accident in 1930 having survived all the aerial dangers of the Western Front. Caryl Hargreaves worked as a company director and also found time to publish several books, including, A Glimpse at Soviet Russia (1931).

Francis Lee-Norman (Harrow), yet another MC winner, transferred to the RAFVR in 1939, as a change from his service with the Royal Engineers during 1915-18. Later, he enjoyed a successful Civil Service career. After a post in the Foreign Office and a spell as a Company Director, Richard Bryatt (Radley), qualified at St Tomas’s Hospital and became the Medical Officer for Trinity College Glenalmond. Medicine was the calling also of William Waller (Charterhouse). Having spent the war with the RAMC, he was later appointed as a Demonstrator in Physiology at the University of Liverpool. He died in 1946. Finally, Victor Cartwright (Marlborough) quietly took up farming in Warwickshire.

Those were the fortunes of Harry Moseley’s year-group who went to war, 1914-18. The number of medals and mentions in dispatches is testimony that these Old Boys fought bravely. Whether they survived or were killed was down to chance. As Erich Remarque put it, ‘Every soldier owes the fact that he is still alive to a thousand lucky chances and nothing else. And every soldier believes in and trusts to chance’.