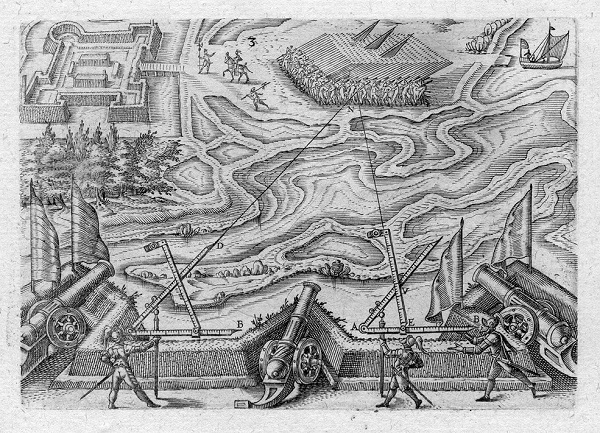 Surveying is a modern professional activity – necessary and useful, but rarely seen as dramatic or exciting. Not so in the Renaissance. During the 16th century, surveying had a relatively brief moment of glamour.

These beautiful devices were made by Erasmus Habermel, instrument maker to the Holy Roman Emperor Rudolf II in Prague at the end of the 16th century. The tall instrument is a level. Water is poured into the brass bar at the top and establishes a precise horizontal line. The sights at each end allow a distant target to be placed at exactly the same height. It is accompanied by a triangulation instrument. Used for measuring distances, it was promoted as the ideal device not just for surveyors but for military engineers and gunners.

Why would such apparently mundane tasks be deemed worthy of the gilt brass and decorative finish on display here? Measuring something without needing to approach it and touch it still retained an aura of the marvellous. We may have lost a sense of the magic of measurement. But it was sufficiently powerful in the Renaissance for surveying instruments to be prized as splendid courtly devices.