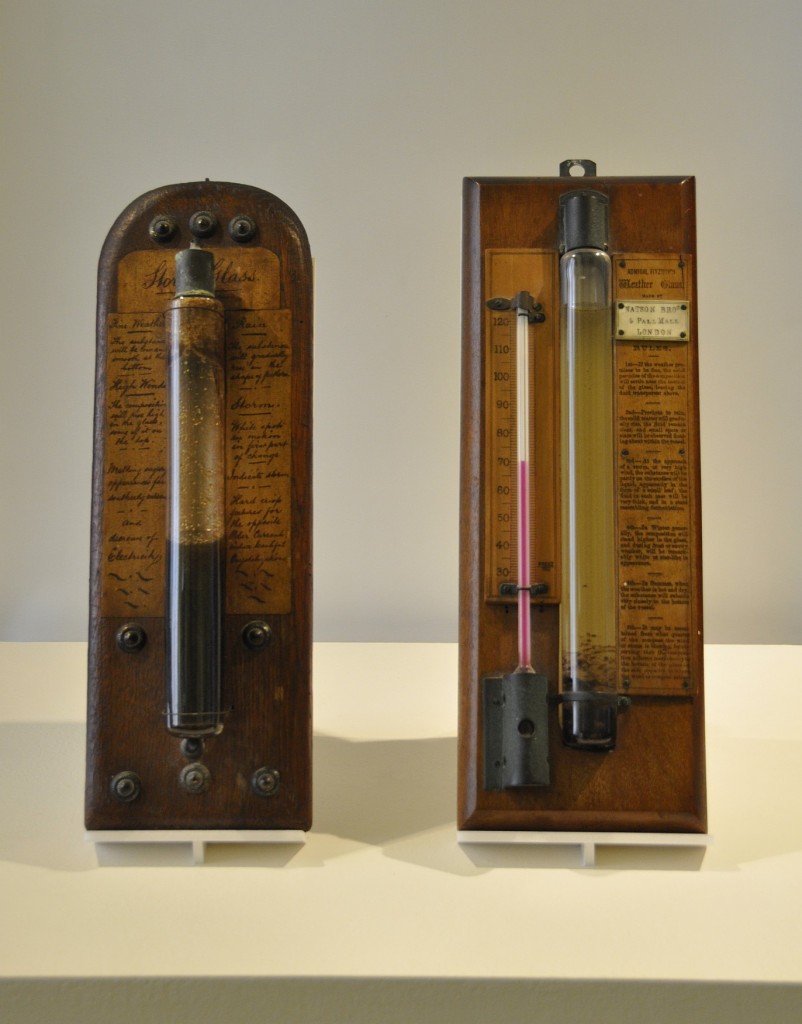 Two examples of the ‘storm glass’, one to the design of Robert FitzRoy.

According to Robert FitzRoy, hydrographer, meteorologist, and captain of HMS Beagle during Darwin’s voyage, instruments known as ‘storm glasses’ were being made in England for more than a century before he published The Weather Book in 1863: “Who was the inventor is now very uncertain; but they were sold on old London Bridge, at the sign of the ‘Goat and Compasses’.”

Having begun to study these glasses in 1825, “as curiosities rather than otherwise”, FitzRoy concluded that they indicated what he called the ‘electrical tension’ of the wind and could be used as meteorological instruments.  He determined that the liquid, whose changing appearance was examined by the user, should consist of camphor, partly dissolved in alcohol, with water and some air, hermetically sealed in a glass tube.  He warned that, as well as instruments of his design, “There are many imitations, more or less incorrectly made.”

One of the instruments on display was made by Watson Brothers of Pall Mall, well known for their microscopes, and carries FitzRoy’s approval.  The other, with manuscript instructions, may be one of the many imitations, or even an instrument bought at the ‘Goat and Compasses’.

The instruments are displayed on the Fourth Plinth by Brian Wilson, who records buying the ‘Storm Glass’ in ‘an antique shop in Ulverston once a small ship-building town in Lancashire. I purchased it c.1963 with a second, labelled “Admiral Fitzroy’s Weather Glass, made by Watsons, 4 Pall Mall London”, as an unscientific curiosity.’