Eccentric eating is always good for a laugh. The Museum library contains a book with the charming title of “Hippophagy”, a serious study of the eating of horses in classical times.

One of our eccentrics, William Buckland, was omniphagous; the following paragraph is merely a quote from the exhibition label. 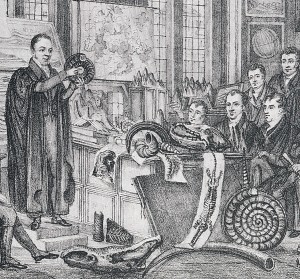 >>>The geologist William Buckland (1784–1856) had a reputation for eccentricity. His lectures in this building were well-attended, lively occasions, with Buckland moving around his specimens and large maps, telling jokes and imitating the gait of extinct animals. He dressed oddly and carried a large blue bag where he kept such items as mammoth teeth, hyena skulls and fossil faeces, which he enjoyed producing in senior common rooms and at dinner parties.

He loved eating unusual meat, such as crocodile, hedgehog, mole, mouse, puppy and ostrich. According to the writer Augustus Hare, he was once shown ‘the heart of a French King preserved at Nuneham in a silver casket. Dr. Buckland, whilst looking at it, exclaimed, “I have eaten many strange things, but have never eaten the heart of a king before,” and, before anyone could hinder him, he had gobbled it up, and the precious relic was lost for ever.’<<<

One might also regard the Harcourt family of Nuneham as eccentric for wishing to preserve the heart of a French king there in a silver casket ; the moral of course is, wait until after dinner before showing people your treasures.

J. S. Haldane (mentioned in an earlier entry), who being a physiologist was not in the least bit squeamish, once served a black pudding he had made out of his own blood.