As a classicist (well I was once, at school) I should have known better than to coin the word “omniphagous”, a hybrid of Latin and Greek; since you’re too busy to put me in detention I’ll do it myself (later); yes of course, it should be polyphagous, Herschel would be ashamed of me. 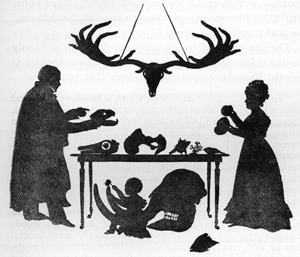 Silhouette of Dr William Buckland and his family at home - polishing off a midnight feast?

Battered mouse, I understand, was a staple in the Buckland household; hippophagy was certainly indulged in; and there must be some way of working in coprophagy, though I’ve no definite information that he tried it. Buckland’s son Frank (who you’ll be astonished to learn grew up to be rather eccentric) once boasted of having had panther chops for dinner, explaining that the panther had been buried several days before they realised what a waste that was, and had it exhumed and cooked.

Yet funnily enough the guinea-pigs roamed free, the house was full of them; and a pony that trotted round the dining room; and an eagle that swooped into the cathedral during service one time.

Talking of eccentric eating, was it Hooke or Greatorex who tasted the liquid found in the coffins of St Martin in the Fields during the rebuilding of London? no matter

And our own Robert T Gunther (one time Keeper of the MHS) who suggested the Botanic Garden should be turned to growing “patriotic cabbages” during the First World War; there we are, back to vegetables again …