Modelling the Structure of Penicillin

Model of the Structure of Penicillin, Dorothy Hodgkin, Oxford, c.1945 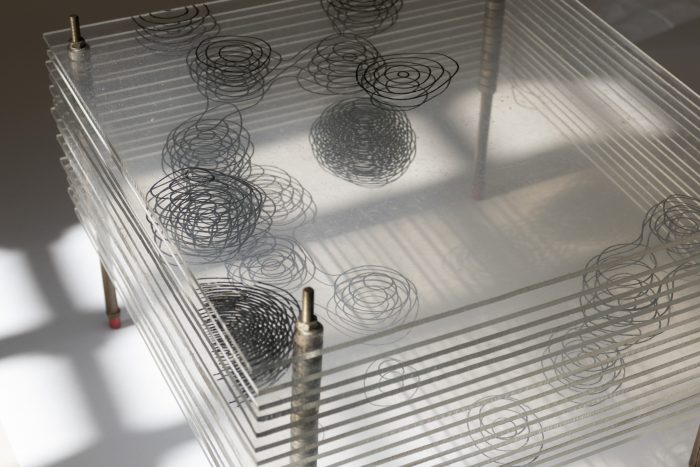 X-ray crystallography is a technique more often associated with Rosalind Franklin’s work on DNA in the early 1960s. Prior to this in the early 1940s the Oxford biochemist Dorothy Hodgkin had pioneered work in protein crystallography. At the start of World War II penicillin was a major research focus at Oxford and Hodgkin took up the problem of establishing its molecular structure in 1942. Hodgkin developed a structure based on the X-ray crystallography work done by a team of people across academic and industrial chemistry; Barbara Low, her co-worker at Oxford and C.W. Bunn and A. Turner-Jones at the British company Imperial Chemical Industries all contributed.

Hodgkin’s model is drawn on sheets of Perspex and gives a three dimensional contour map of part of the one of the crystal salts of penicillin. The contours are lines of electron density and show the positions of individual atoms in the structure. This artefact of Hodgkin’s research is a rather evocative example of three dimensional scientific modelling being used to image an invisible structure before the age of computer driven virtual imaging.

After her work on penicillin Hodgkin’s started work on vitamin B12, for which she was rewarded the 1964 Nobel Prize in Chemistry. Underlying all this research was Hodgkin’s ambition to establishing the structure of insulin. In 1934 when insulin crystals were first given to Hodgkin, X-ray crystallography was unable to offer insight into the structure of such a complicated molecule. Refining imaging techniques, Hodgkin finally revealed the structure of insulin, 35 years later, in 1969. In the 1940s, one of her Oxford students was Margaret Roberts, the future Prime Minister Margaret Thatcher, who installed a portrait of Hodgkin in Downing Street in the 1980s.

Computer Animation of the Structure of Penicillin