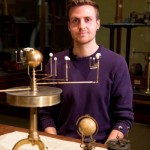 What is an orrery?

An orrery is a mechanical model of the solar system that shows the relative positions and motions of the planets and moons according to the heliocentric (sun centred) model. In this case the planets, which are made of ivory are mounted on brass armatures which extend from a central shaft and are rotated independently by a geared wheelwork mechanism contained in the base. The mechanism is operated by turning a small handle extending from one side of the base. The overall effect is to imitate the relative periods of rotation of the planets about the sun. 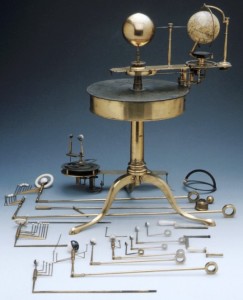 The model is not, however, to scale. Although the relative sizes of the planets may be represented to an approximation, the relative distances from the sun and between the planets would be much greater. If these planets were to scale with reference to the sun, the earth would be less than one tenth of a millimeter and would be positioned over 10 metres away while Uranus would over 200 metres away.

There are three alternative sets of fittings that can be mounted above the circular brass box containing the wheelwork which controls the movements of the planets. As mounted, the orrery shows the planets as far as Uranus, the extent of the solar system as known c. 1800. Other fittings could be used to demonstrate the respective motions of the earth and the moon together with eclipses (lunarium), or the revolution and rotation of the earth and the changing seasons (tellurian).

Though the Greeks had working planetaria, the first orrery that was a planetarium of the modern era was built in 1704 by clock makers George Graham and Thomas Tompion. The name of the instrument came from Charles Boyle, 4th Earl of Orrery, who commissioned one of the earliest models. 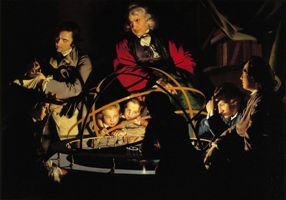 ‘The Orrery’ by Joseph Wright of Derby

Orreries became very popular at this time and were used both for teaching purposes and, for those who could afford them, for recreation in the home. Their popularity was boosted by an enthusiasm for the work of Sir Isaac Newton whose universal theory of gravity had provided an explanation for the orbits of the planets. Interest in astronomy became even greater when Uranus was discovered in 1781 by William Herschel, leading to the manufacture of many more instruments of this kind.

To the people of the 18th -century, these objects would have been used to convey the relatively new mechanistic explanations of the movement of the planets, but also inspired awe at our precarious position in this “clockwork universe”. This is clearly expressed in the well known painting by Joseph Wright of Derby, c.1766, of a philosopher giving a lecture on the orrery. The painting portrays a family group held in fascination by the wonders of the solar system as explained by the philosopher with the aid of an orrery.